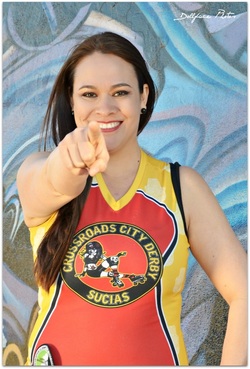 CCD's State of the Union.... It was April 2010 when a friend and I happened upon a group of derby girls at El Patio in Mesilla. All was fine and good until my friend suggested I go up and ask them what roller derby was about. She thought I would be good at it and teased me about it for a bit. It took her threatening to go ask for me, if I didn’t go myself, to finally convince me to turn around and talk to the skater standing right behind me. That skater would eventually become one of my closest friends and teammates, The Venomous DiMilo. Venom shared some basic info with me, including when and where practices were held. Despite the fact that I had no idea how to skate on quads, I showed up to my first practice and never looked back. Roller derby is one of the most challenging things I’ve ever done, both mentally and physically. All these years later I’m still asking questions.

Our league is six years in and we’ve learned so much. Mostly that Crossroads City Derby is a roller derby league that’s not just about skating, it’s about friendship, camaraderie, loyalty, trust, fun, strategy, prioritizing, and a whole lot of hard work both on and off the track. This season we’ll have an opportunity to continue learning and challenging ourselves.

The 2016 season will start off with travel team games in March, move into home team games in June, and the season ending with a statewide home team invitational tournament in September. We have quality skaters trying out for the travel team, great talent entering and returning to our home teams, and a very hard working group wrapping up fresh meat training.

This season, and every season past, would not be possible without the foundational work of our league founders: Puncher Villa, The Venomous DiMilo, and Hippie Check. Having started a league with no roller derby history in Las Cruces, they learned quickly and without much guidance what was needed to run a roller derby league. We benefit from their work everyday, and as President I plan to honor their work by being present and working with all my leaguemates to continue making CCD the best little league in southern New Mexico.